Hiring the Right People for your Tradie Business 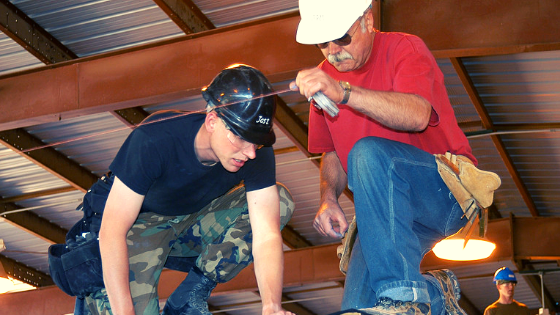 How to hire tradies properly

Hiring the right people for your business can be quite the tricky thing. Because you have things to do, got a business to run, You really want to get it done, don’t you? So you decided you want a new person, and you really just want it done. You want a new person in the job doing their thing and that leaves you vulnerable to making poor decisions and rushing decisions.

When you check out a resume or when you’re interviewing someone, your thinking something like, “Hope this is the right person.”

And your interviewing as well. They come to the interview or submit their resume hoping it’s the job from heaven, the best job ever. They either have done this type of work before or they’re looking for an improvement from their current work situation, and they want it to be right too.

So you’re both there hoping it’s going to be great and that leaves you both vulnerable to making a poor decision.

It’s easy to hire the wrong person given this situation, isn’t it?

A tradie business is a people business. You’re dependent on hiring the people that will help you to grow your business. After all , you grow by hiring more people to do the work and by taking your share of the cut.

You need people to run it as well, not just the trade people doing the work but the people running the operation behind the scenes, in the office, all of that.

If you don’t hire the right person, someone who turns out to be no good, it will be a costly error. It costs you the time.

It’s costly and you’ll regret it when you made the bad decision.

I regularly assist people who’ve made a poor hiring decision, and have to deal with the fallout of that.

As a business adviser for trades people, I see people paying the price for ill-considered hiring decisions, particularly in the new part of their relationship, and it can be very frustrating and costly for them.

If you’re hiring people and then hiring replacements, you’re limiting your ability to grow. Hire badly and you get caught in that loop of rehiring, you’re not really helping yourself grow.

So this piece is about hiring properly with discipline and by being methodical.

Hiring suitable people can be a bit tricky because of that loaded environment. But you can improve your chances of finding good people by using some disciplines and some structure. And like most of my advice, it’s not difficult to understand.

I’m going to teach you a very simple process to follow.

What is important is the ‘doing it’ – sticking to the process and the being disciplined and not just going “Thank you, you seem great,” and hiring somebody (which is very common).

Try and keep it short. We just want a description of what you expect them to do.

Don’t just say ‘Concrete Finisher’. Tell them what we are doing and tell them what they’ll be responsible for.

2. Write down the attributes you want them to have.

All that stuff. It will be different for different businesses. Whether you need a craftsmen, or if you need someone to get things done, you want people who have different attributes.

Write this stuff down, “What do you want this person to be like?”

I’m obviously thinking about a trade person here. But if it was somebody in the office, you might want them to have different attributes like being organised, being able to juggle things more and being good dealing with .

3. Write the job ad and write about the job description and the attributes you want.

You’re ruling people out here. If your ad says “I need someone who’s presentable” and they see that in your ad and they’re a scruffy bugger, they might not apply. So you’re helping yourself by ruling out that people you don’t want.

Write those things in your job ad as well as the pay grade.

4. Filter through some resumes.

Don’t bother interviewing the people who clearly don’t fit. Be disciplined here. If there’s nobody that fits, don’t just go and pick somebody who’s the best out of the poor bunch. Wait until somebody good shows up.

Interview people for those attributes and prepare yourself some questions that help you establish whether somebody is punctual, tidy, etc.

And if they show up scruffy and you want somebody tidy, they’re not in a good shape already.

And don’t just say, “Are you punctual?” because everyone’s going to say “Yes“.

Ask some questions where they have to tell a story about being punctual or how often they’re late. Things like that. Do your interviews and select your winner.

I know this sounds tedious because it is tedious. That’s several hours of work, maybe even a couple of days.

It’s tedious but it’s worth it.

The price you’ll pay for a bad employee is much higher than a few hours of being a bit disciplined and methodical.

If you’re hiring in a haste, and then you complained to me that you have hired in haste and now you’ve got a problem, I’ll probably say something like, “I told you so”. So it pays to be disciplined and do the work.

I have seen people hire somebody who turned out to be an absolute disaster. They were dishonest and appeared suspect and a bit strange to begin with. Their LinkedIn profile looks dodgy. They could smelled a rat but they hired them optimistically, anyway. They gave them the benefit of the doubt and they lasted a couple of days.

The price you pay

So we all wished that we listened to our instincts and to the voices in our head that said, ‘We probably shouldn’t hire this guy’ rather than giving him the benefit of the doubt. And we wished we’d checked his references because we wouldn’t have wasted these couple of days and $3,000.

He threatened to make a call if they didn’t pay him for the week. So they had to pay him $3,000. They were $3,000 and 4 weeks behind. Some discipline and some method would have saved them from that hassle.

Here’s what you need to to do to avoid this:

There you go. Hire with some discipline and some method. See you later.